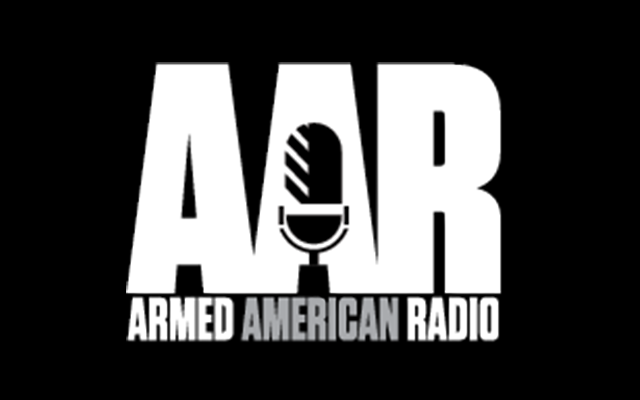 Focusing on the second amendment and everything related to the topic, Armed American Radio and Armed American Radio’s Daily Defense with Mark Walters bring a unique blend of conservative talk, humor and hard-hitting truth about the fundamental right to bear arms that the mainstream media wouldn’t dare discuss.  Topics include but are not limited to:

Broadcasting LIVE every Sunday evening from the Crossbreed Holster Studios and distributed NATIONWIDE by Salem Radio Networks, AAR is available to any radio station in America and is heard in hundreds of cities on over 140 broadcast affiliate stations, 200 digital cable radio channels and Apple TV as well as right here on the Armed American Radio website LIVE STREAM player. Now one of the fastest growing nationally syndicated radio broadcasts in America, AAR is adding affiliate stations at a regular pace. To find a station near you, click the “where to listen” page. Our studio line is 1-877-956-9566 if you have something to contribute during the live show.

Beginning Monday April 6th, 2015 Mark kicked off the newest daytime radio show in America with the Armed American Radio Daily Defense with Mark Walters show.  Listeners wanted more and you got it!  Keeping the same core audience, the daily show will have greater flexibility to explore those topics that relate to our rights and freedoms but rarely, if ever make the national news.  Being able to focus on the current events of each day as they pertain to our freedoms and the well-funded attacks against them, Mark is better able to explore topics that matter to every American now in a daily format.  When asked about the relationship between the two programs, Mark’s response was “Married but living in separate rooms, if that makes any sense.  The weekend format required me to pass over many stories in the essence of time that I called it ‘topic triage’ forcing me to focus on a few stories and miss many others.  The daytime format allows me much more flexibility and the power to connect to a news hungry daily audience.  While the weekday program will be more news oriented, the weekend show will be able to tie it all together nicely.  While every other talk radio personality is discussing the exact same things each day, I’ll be giving listeners something they’ve never heard before on talk radio!”

In November of 2002 just two weeks after the birth of his daughter, Mark found himself the secondary intended victim of an apparent carjacking attempt while stopped at a traffic light on E. Fletcher Ave. in the Suitcase City section of Tampa, FL while on his way to work one day.  Luckily on that November morning he was carrying his Glock 36, 45 caliber handgun. When the criminals, both of them, found themselves unable to get into the vehicle stopped just off of his left bumper, they turned their attention towards him.

Watching the frightening events unfold in front of him and happening at a frantic pace, Mark un-holstered his weapon and leveled his 45 at the criminal standing just feet away from him and approaching his vehicle. When confronted with a gun pointed directly at his chest and without having to squeeze the trigger, the closest attacker waved off his partner and both men retreated to their vehicle and fled the scene.

That frightening experience became the subject of his first column with Concealed Carry Magazine titled “The Importance of Carrying Your Gun 100% of The Time”, now listed in the magazines “Best Of” category.  Now a Regular Contributing Editor for Concealed Carry Magazine he has been penning his column “One to the Head” (formerly The Ordinary Guy) for over 11 years.

Mark had always been a supporter of the right to bear arms but rededicated his life to the preservation of our second amendment rights after that frightening event.  His letters and opinions appeared many times in the Tampa Tribune over the years countering the anti-gun views of a local anti-gun crusader. Mark is the co-author of two critically acclaimed books.  His first, Lessons from Armed America, co-written with Kathy Jackson ( foreword by Massad Ayoob), was released in October 2009 by Whitefeather Press to great reviews and highlights the stories of those who found found themselves the victims of violent crime and either used a gun or wished they had one when they needed it most, including his own story.  Written in groundbreaking format, Mark told the story of the frightening events of true crime which his co-author followed with critical analysis.  His second book, Lessons from Unarmed America written in the same format with famed trainer and self-defense expert Rob Pincus includes a foreword by rock star and activist Ted Nugent.

Both national radio shows have broken new ground in the world of talk radio by bringing significant exposure to the plights of Americans right to self-defense.  Interviewing some of the nations biggest news makers and activists as well as hard hitting political commentary on the days current firearm news, both the weekend and weekday show are one of a kind. The list of folks Mark speaks with includes rock stars, country singers, radio personalities, national and local politicians, TV stars, internationally recognized trainers, weapons experts, criminal psychologists, television hosts, authors, attorneys, real people who have used a firearm to defend themselves against violent attack and regular, ordinary folks who make a difference.

Mark was one of the headline speakers at the Second Amendment March in Washington, DC on April 19th, 2010 joining other guests such as Suzanna Hupp, Sheriff Mack, Dick Heller, Mancow, and others who proudly proclaimed the birthright of every American to keep and bear arms. He has appeared countless times as a guest on local and national radio shows including the Mike Gallagher Show, Bill Bennet’s Morning in America, The Michael Medved Show, Dennis Prager, Hugh Hewitt, Lars Larson, The Bill Cunningham Show, The Janet Mefford Show and many, many others including co-hosting the nationally syndicated G. Gordon Liddy program. In addition, Mark was a guest on Fox Businees Channel’s The Stossel Show, with John Stossel to discuss the topic of More Guns, Less Crime and appeared weekly as a guest on the popular live web TV program, American Trigger Sports Network with host James Towle as well as the Stop the Threat television series.

Mark is a member of the NRA, an NRA Certified Instructor in three disciplines, a member of the National Shooting Sports Foundation as well as a card carrying member of the Second Amendment Foundation, The Gun Owners of America and a vocal 2nd amendment activist. In the spare time of his “real life,” he ran his own successful business for over 13 years and now works full time to bring you Armed American Radio and the Daily defense shows.

Mark defends our freedoms with the RIGHT voice at the RIGHT time and brings a frank discussion of the right to defend your life to FREEDOM loving Americans 6 days a week!

Armed American Radio and Armed American Radio’s Daily Defense with Mark Walters are broadcast live to the nation from the Crossbreed Holsters Studios and are heard in a combined hundreds of cities across the nation.  Mark’s voice can be heard on radio stations across America at various hours of the day and night, 7 days per week, somewhere!

Because our freedoms are at stake. We are now faced with the most ANTI-FREEDOM, GUN HATING, administration and agenda in our nation’s history. The timing for this program is no coincidence. Patriotic Americans are needed to stand up and defend our Constitutional rights now more than ever. The onslaught of gun-haters who want to take away your freedoms CAN NOT AND WILL NOT GO UNATTENDED BY THE USCCA and Mark Walters.